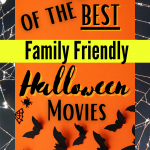 Celebrate Halloween by working your way through some Halloween movies the whole family can watch together. Our list is made up of not too scary G and PG rated with a couple of NR which is no rating.

We have included Halloween movies for toddlers, tweens, and teens which the adults will also enjoy. Don’t just play these movies for the kiddos, watch with them. Create memories. Make some snacks, get cozy by the TV and have some family fun.

You can print the entire list so you can check them off as you work your way through the one’s you want to watch. The link to print is near the end. But first, let’s talk Halloween Food so you can make some snacks for movie night.

Your little’s will love these super duper easy to make Charlie Brown cookies while they are watching The Great Pumpkin. FYI, you will enjoy those cookies too.

If you are also a fan of sweet and salty then you will love these no bake Corn Chip Halloween Dessert Bars. You get to have some fun with candy googly eyes.

When we think of Halloween, the first thing we think of is candy. I made these Halloween Candy Kabobs for a family Halloween party and they were a big hit. No cooking involved.

Do you love serving food in a jar with a spoon? It’s always fun to eat that way for a festive atmosphere. Make these delicious and fun to eat Halloween Brownie Parfaits. We added some orange candy sprinkles for fun.

All movies do not necessarily have a Halloween night plot but many are watched during the Halloween season because of the nature of the movie such as the Transylvania series of movies.

It’s the Great Pumpkin, Charlie Brown (1966) A must see every year. Comes on TV and is available for streaming. See our easy to make Charlie Brown Halloween Cookies.

E.T. the Extra Terrestrial (1982) PG A troubled child, Elliott, summons the courage to help a friendly alien stranded on Earth to return to his home world.

Hocus Pocus (1993) PG A curious youngster moves to Salem, where he struggles to fit in before awakening a trio of diabolical witches that were executed in the 17th century.

Scary Godmother: Halloween Spooktakular NR (2008) Little Hannah Marie is excited to be going trick-or-treating with the older kids. but when her rotten cousin Jimmy tries to ditch her in the dark basement of a spooky house, Hannah is rescued by her Scary Godmother and whisked away to the best Halloween party ever!

Scary Godmother: The Revenge of Jimmy NR (2008) Hannah and her friends must foil her cousin Jimmy s plans to ruin Halloween!

Mickey’s House Of Villans (2002) Villians try to take over the house of Mickey Mouse.

The Adventures of Ichabod and Mr. Toad (1950) G A Disney classic intertwining The Wind In the Willows and The Legend of Sleepy Hollow.

Pooh’s Heffalump Halloween Movie (2005) G A hilariously haunting Halloween in the Hundred Acre Wood. Winnie the Pooh fans will love the adventures of Pooh, Roo, Lumpy and Tigger. Does Pooh eat too much Halloween candy?

Toy Story of Terror G The Toy Story gang have to save themselves from an evil motel manager.

Monsters Inc G (2001) A little girl named Boo manages to scare the monsters in charge of a scream processing factory.

Wallace & Gromit: The Curse of the Were-Rabbit G (2005) Wallace and his loyal dog, Gromit, come to the rescue of a village plagued by rabbits before an annual vegetable competition.

Arthur and the Haunted Tree House G (2017) Trick or Treating adventures with Francine, Binky, Arthur, Buster and Ladonna and Muffy and Bailey.

The House With The Clock In The Walls Tweens, teens PG A 2018 kid friendly movie that fans of Goosebumps are sure to enjoy

The Addams Family 2019 PG It’s the Addams Family’s first animated comedy. Not really a Halloween theme but was released in October and this macabre family fit right into Halloween any time of the year.

ParaNorman (2012) PG A misunderstood boy with a strange inherited talent takes on ghosts, zombies and grown-ups to save his town from a centuries-old curse.

Hotel Transylvania (2012) PG Dracula pulls out all the stops to protect his daughter from a human teenage boy who stumbles into his resort hotel. There is a costumed event Dracula tries to use to hide the human he allowed into the resort.

Hotel Translyvania 2 PG (2015)Dracula and his friends are at it again to try to keep Mavis from leaving the resort.

Hotel Translyvania 3: Summer Vacation PG (2018) Count Dracula and his friends participate in a cruise for sea-loving monsters, unaware that their boat is being commandeered by the monster-hating Van Helsing family.

Halloweentown II: Kalabar’s Revenge TV-PG (2001) An old enemy threatens to turn Halloweentown into a dreary version of the real world.

Halloweentown High TV-PG (2004) Marnie proposes bringing a group of Halloweentown students to her own high school in the mortal world.

Casper (1995) PG A ghost therapist and his young daughter meet a friendly young ghost when they move into a crumbling mansion in order to rid the premises of rambunctious spirits.

Casper’s Scare School 2006 movie. There is a TV series of the same name.

The Dog Who Saved Halloween (2011) PG A dog, Zeus, encounters a creepy neighbor at a haunted house and has to save his family. Also see The Dog Who Saved Christmas (another Zeus adventure).

The Haunted Mansion (2003) Eddie Murphy. A Disney horror comedy based on a Disney ride by the same name.

Goosebumps (2015) PG A boy unintentionally unleashes monsters from the pages of their books and they begin to terrorize the town.

Our Peanuts Great Pumpkin Party was a big hit and loads of fun with games and party food you can easily replicate.

Then there was that time we hosted a Black and White Skeleton Halloween Party and let two-headed Betty be the hostess. She rocked it too!

You can make a Silly Spider Wreath just like this one because all of the supplies come from Dollar Tree. It’s easy and complete in minutes.

If 21 isn’t enough then see Even More Trunk or Treat Ideas we have collected.