Our two youngest grandchildren love raiding my craft room and doing kids crafts while they are here! I love watching them craft and using their imagination!

They did some summer crafting while visiting a few weeks ago. I gave them carte blanche on use of craft supplies! 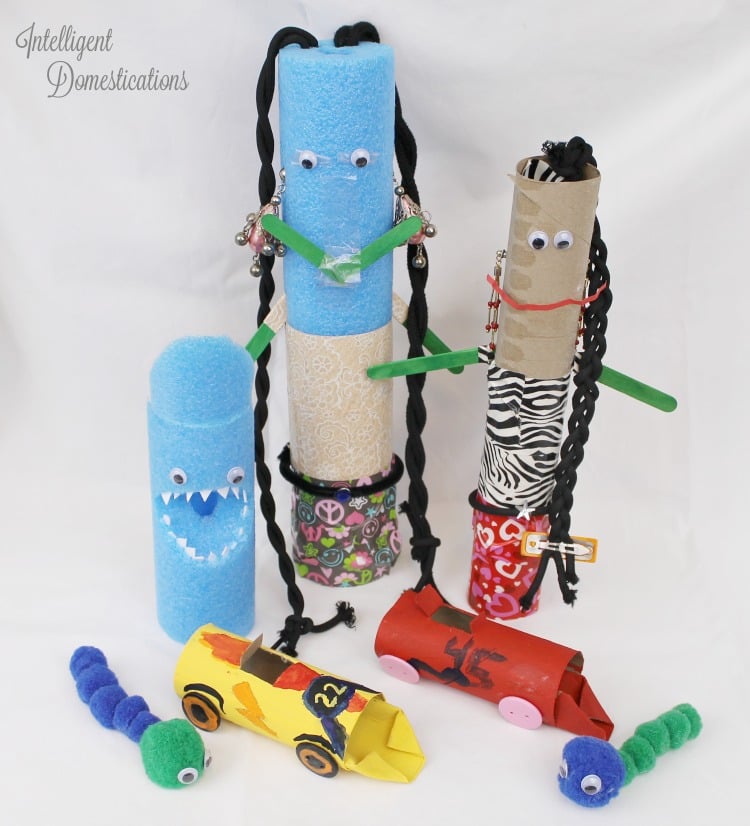 Isn’t that just the cutest collection of kids crafts! They had fun and I did too. Here is the scoop!

These supplies along with a good dose of imagination, a little creativity and our two youngest grands had a fun two days in my craft room! I enjoyed watching them and only helped when absolutely necessary.

I always let them scroll Pinterest before they go into the craft room. Cullen who is 10 loved the toilet paper tube cars and the pool noodle shark ideas. Ashley who is 8 wasn’t impressed with too much. She thought up the pool noodle doll as a spin off of the shark because she wanted to make a doll, not a shark. She is such a girl!

None of it was hard. They saw pictures and got to work using their own touches. 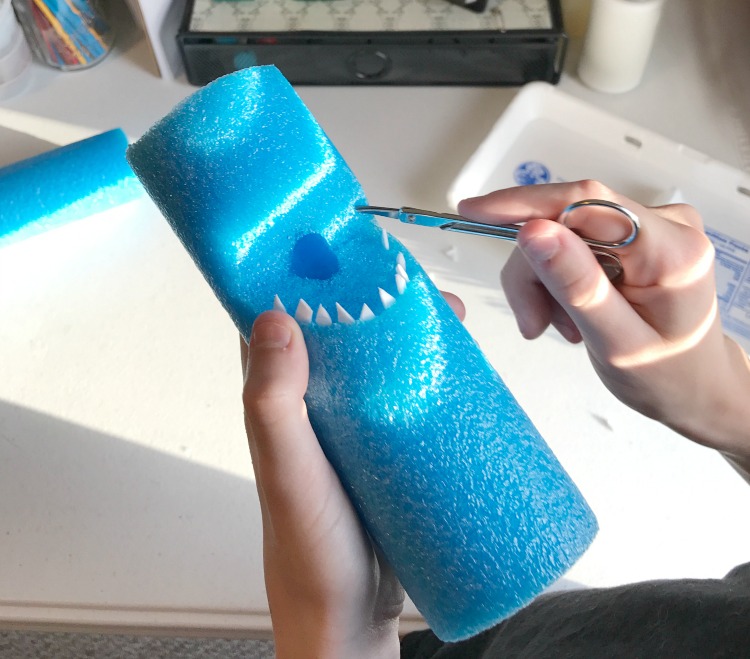 A grown up should do the cutting which was my job. Cullen decided how long he wanted his shark to be so I cut the pool noodle according to his specifications. The I sliced a piece out to create a wide open mouth. Then Cullen became a little like Hermie from the Rudolph the Red Nosed Reindeer story and became a dentist.

Making a pool noodle shark requires a little patience when adding the teeth.

First you have to cut the teeth from a reliable substance such a white egg carton. Then use a sharp object such as small scissors to poke a hole, add a dab of glue and insert shark tooth! 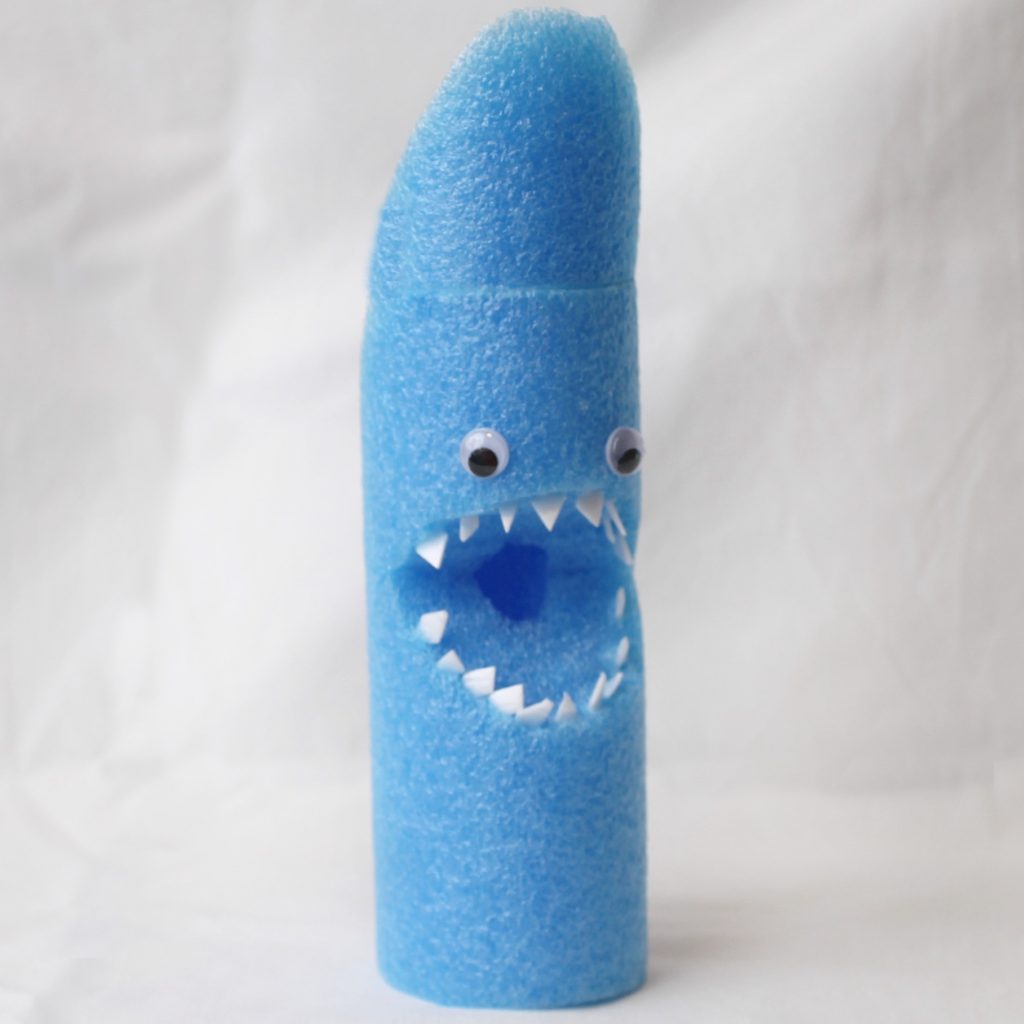 Glue on some Googly eyes. Don’t forget to add a fin to his back!

You can use the piece you cut to create the mouth for the pointed part of his head. That is what we did.  You can also simply cut the pool noodle to have a pointed shape for his head also. 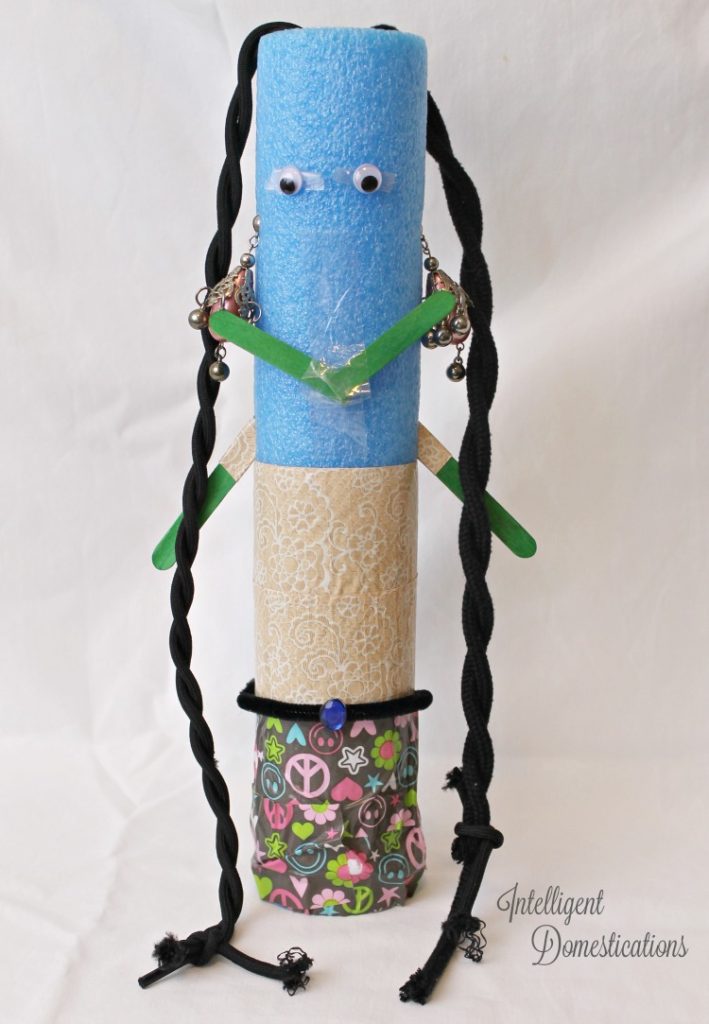 Our dear Ashley created both of her dolls from her own imagination and I love them both. Her preference was tape. I did encourage the use of glue but she was really feeling the tape thing so I let her do what she wanted.

I have lots of repurposed mayonnaise jars filled with all sorts of crafting baubles and such including old wayward shoe laces. Both of her dolls have shoelace hair which she insisted that I braid. I even added an old hair bow to one. Oh trust me, I had fun too. I love that she wanted their hair braided!

Yes, that is her green popsicle stick mouth and isn’t it lovely! I have a canister full of craft sticks in primary colors which have been used to make airplanes by these two grands before. 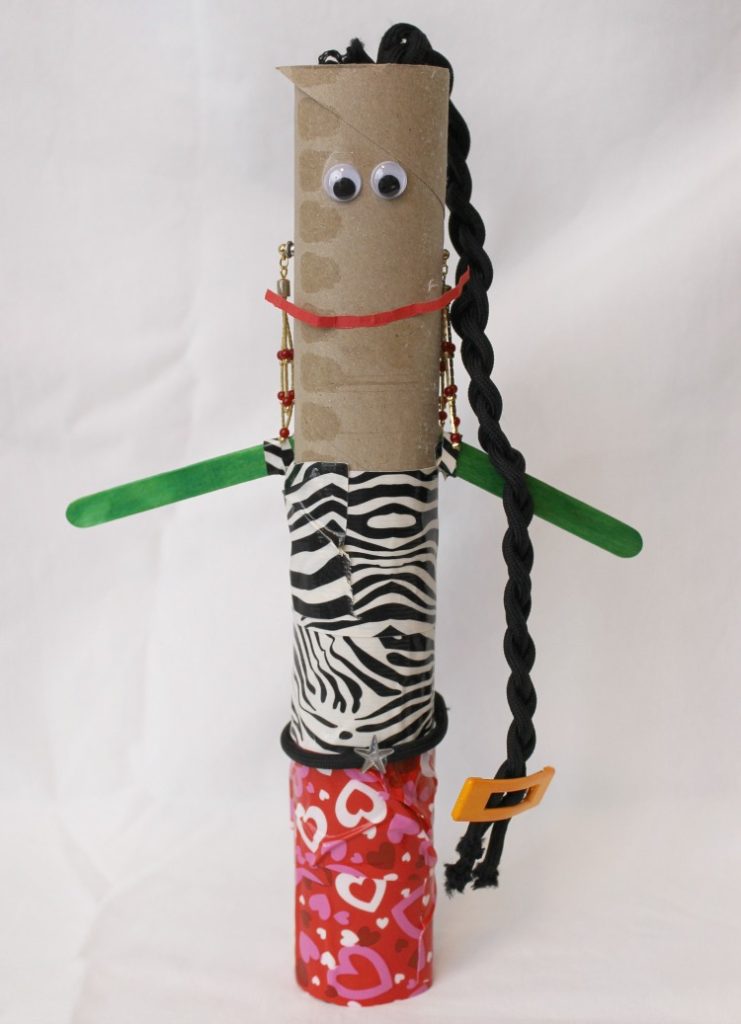 Brooke is crafted from a paper towel tube in much the same way as her cousin Olivia. She is taking the runway in her Duct tape skirt and blouse, braided hair and a gorgeous set of red and gold dangly earrings!

Brooke got red lips and you’ll never believe how! You know that shredded paper gift bag stuffing? One single piece is her mouth!

You can see my original project using the Valentine hearts Duct tape here. It was a cute lunch bag I crafted for Ashley and she still has it. I used the zebra stripe Duct tape to make a Clothespin bag you can see here which I still use!

I love that she gave both of her kids craft dolls a name! 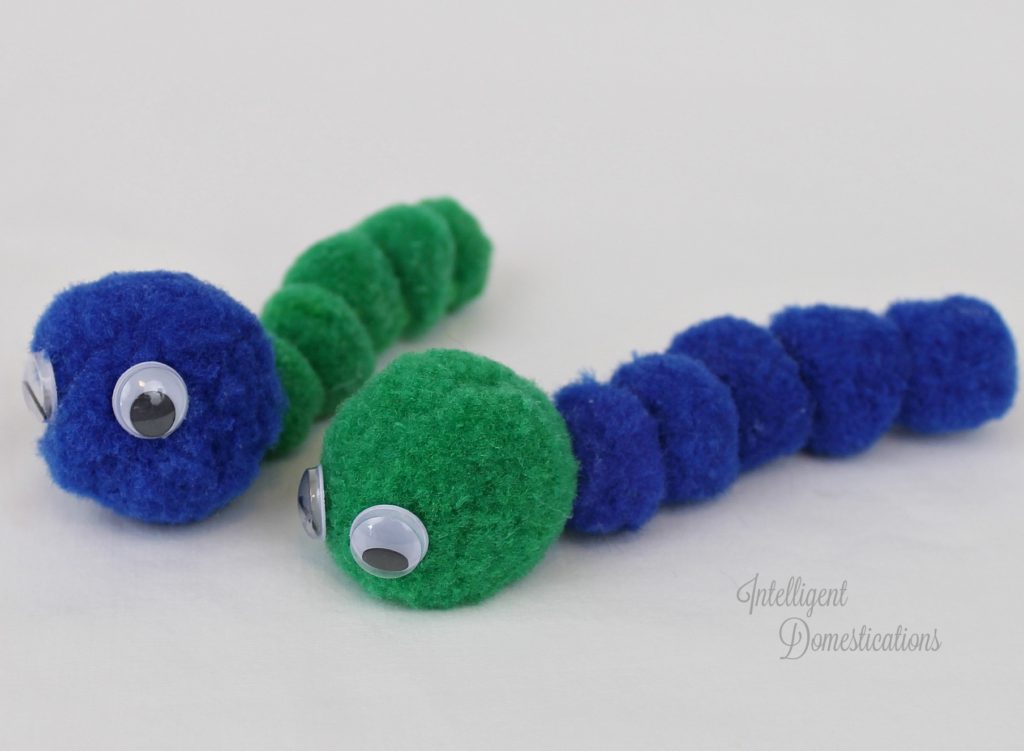 There are lots of Pom poms in my craft room. I store all the different colors in those repurposed mayonnaise jars. The grands had carte blanche with those jars so of course they had to make something with pom poms! While these cute little worms were super easy to glue together, the Elmer’s glue didn’t hold well and I wound up using some E6000 to help out.

Such a simple and fun craft! You can glue the entire worm to a clothespin for added fun.

Now onto the most interesting kids craft which you can find examples of all over Pinterest, Toilet Paper Tube Cars! 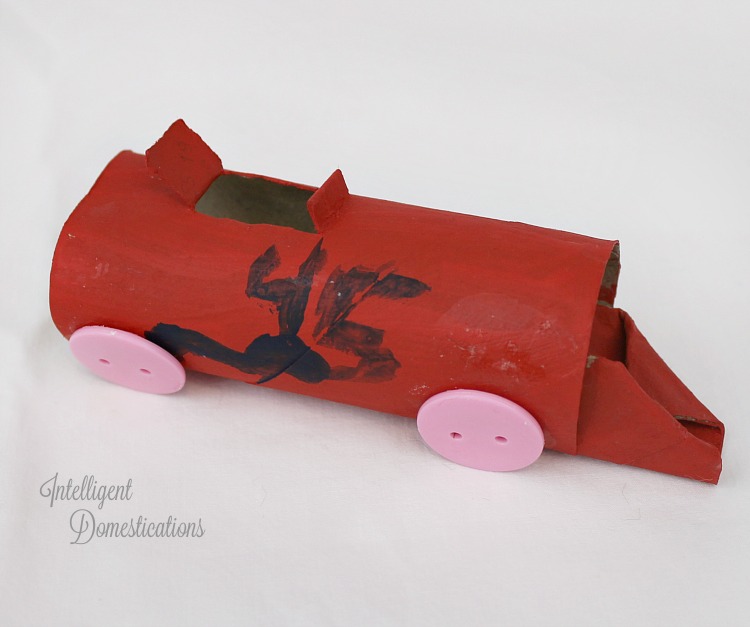 Ashley’s Toilet Paper Car is rolling in with pretty pink wheels and sporting the number 45! The red paint covered well and it only required one coat. Ashley added a free hand lightning bolt under the number. My favorite thing about her car is the pink button wheels! 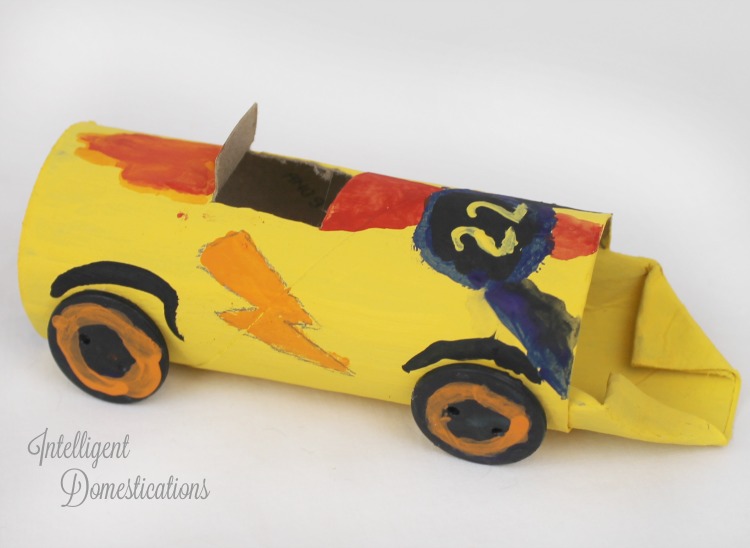 This may have been Cullen’s favorite project. He had details in his imagination and he applied them to the car. 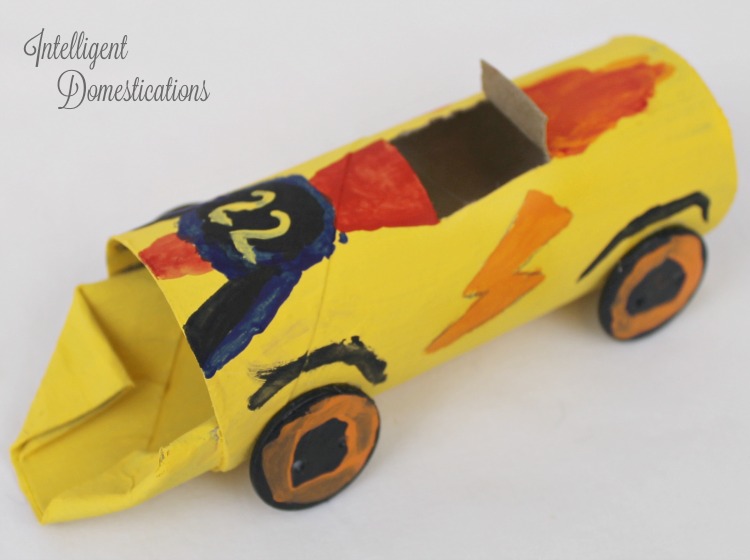 Cullen did all of the paint work himself. He first painted the button wheels black and allowed them to dry.  Then he added the orange stripe  to each one. The car has two coats of yellow paint.

The lightning bolt was created from a template Cullen made after practicing a few times. He painted all the designs free hand and I think it looks marvelous.

The only help I added to the car was to seal the paint on the wheels with a coat of Mod Podge.

And there you have it! Two days of fun at Grandma’s house and lots of memories! 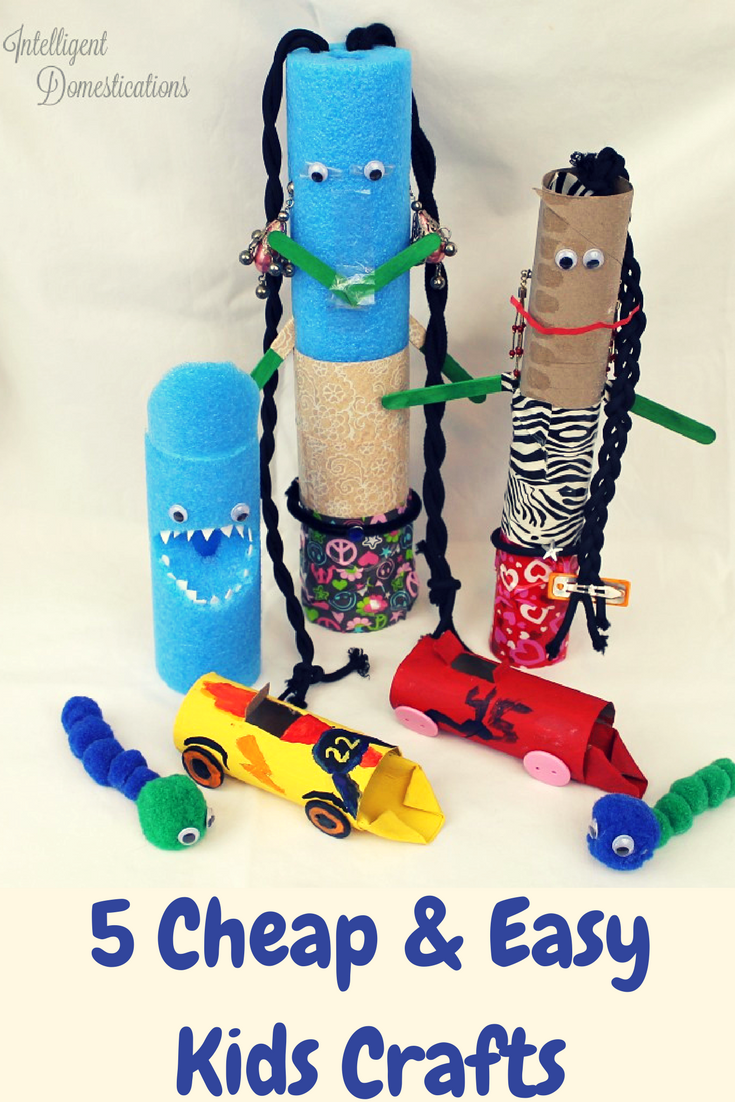 We enjoy partying with these blogs.