Boiled Peanuts are a delicacy here in the south. They are sold everywhere including roadside stands, parking lots, baseball and football games and even prepared at home! Church groups often have boiled peanut fundraisers! 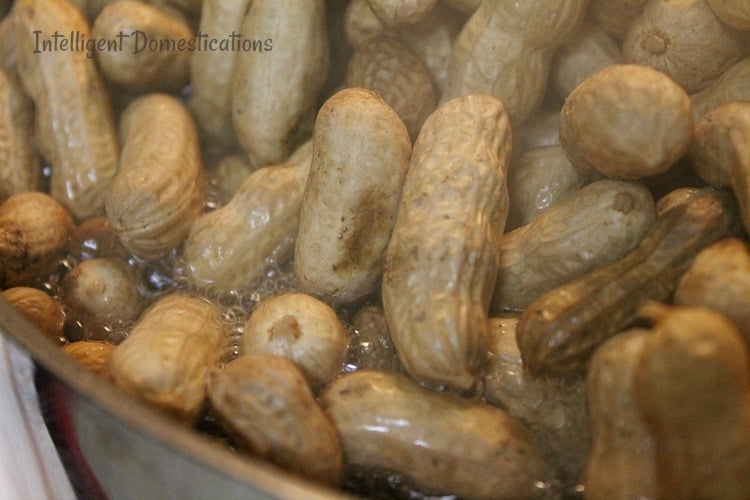 Peanuts are in season between early August until late November. While Boiled peanuts can and are enjoyed year round, they tend to become even more popular during the fall and winter.

My home state of Georgia is ranked number one in the nation in Peanut production. Former President Jimmy Carter was in fact a peanut farmer from Plains, Georgia.

Scroll down for printable recipe

Yes, only 3 ingredients. It’s a pretty cheap snack! In fact I usually spend less than $4 on about a 2-3 lb. bag of raw peanuts at the grocery store.

The trick is knowing how long to cook them and how much salt to add. There is no secret involved. It depends solely and completely on your tastes. Some folks want their peanuts really salty, others not so much. We like salty but not too much! How do you know when they are salty enough? Taste testing.

First rinse your raw peanuts well in a colander. Peanuts are pulled from plants close to the ground and can be dirty so let’s just go ahead and rinse them first. 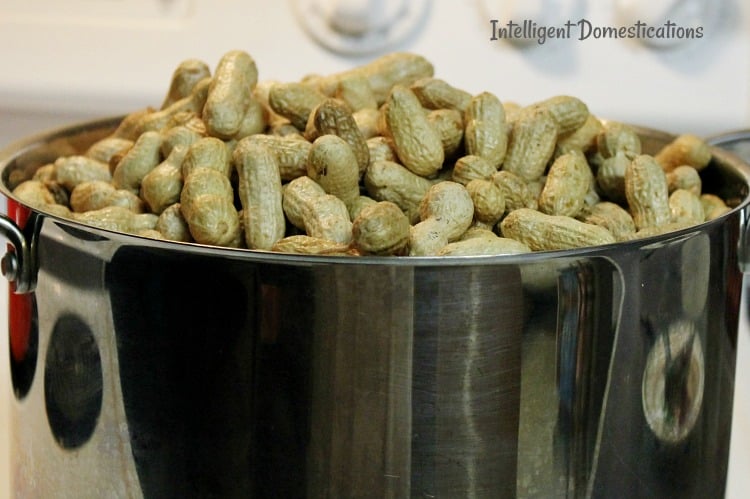 Place all of the raw peanuts into a very large pot or Dutch oven. Add cold water about 2/3 of the way full or until you can’t add anymore or the peanuts will spill out of the pot.

They will be piled above the rim of the pot but that is ok.  As the peanuts begin to soak up the water, they will sink down below the top of the water.

Bring the water to a good boil then reduce heat to simmer.

Cooking time depends on how soft you want your boiled peanuts. We like ours very tender which requires between 6 to 8 hours cook time. We usually boil peanuts on a Saturday when we are not leaving the house. Never leave food cooking on the stove unattended! When we are boiling peanuts, we are doing household chores and take turns checking on the peanuts and adding more water when necessary. I keep my tea kettle full of hot water on peanut boiling day. 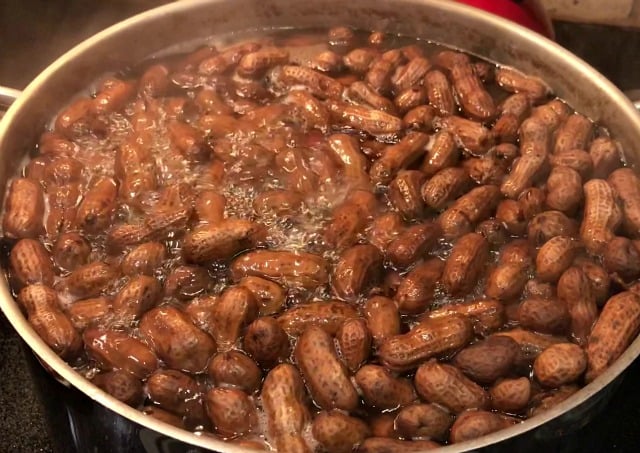 We never add salt until the peanuts have soaked up enough water to settle down below the pot rim. They should be better able to soak up the salt at that point. My hubby is in charge of adding salt. He generally adds about 1/8 cup at a time. Sprinkle the salt over the top of the peanuts then stir into the pot.

Our peanuts usually take about 1 to 1 1/2 cups salt, depending on how many pounds we are cooking.

After the peanuts have been cooking for about 1 to 2 hours, dip out two or three. Allow them to cool and taste them. Tasting is essential in peanut boiling. Tasting the peanuts as they are cooking will allow you to know when they are both salty enough and tender enough.

Saturday football calls for boiled peanuts here in the south. They take all day to cook so these were started around 6 am!!! What fun food would you get up early to cook? #boiledpeanuts #peanuts #footballfood #funfood #SECFootball 🏈 #Saturday #Georgiagrown

Peanut shells are compostable so rather than throw them away, you can either add them to your compost pile or even toss the shells into your flowerbed or vegetable garden.

How to cook boiled peanuts on your stove

Pour the peanuts into a colander and rinse under running water

Once the water begins to boil, reduce heat so that there is a slow rolling boil.

After all of the peanuts have absorbed enough water to no longer float, begin adding salt about 1/4 cup at a time.

Using a large slotted spoon, mix the salt into the boiling peanuts.

About once per hour, dip up 2 or 3 peanuts to cool. Break them open and taste to see if you need to add more salt and for tenderness.

Add about 1/4 cup of salt at a time when adding additional salt.

Peanuts cook 6 to 8 hours at a low rolling boil until they become tender.

You will need to continue to add water throughout the day while the peanuts are cooking. See Notes.

Peanuts are ready to eat when they have reached your desired tenderness which is usually about 6-8 hours of cook time.

Keep a pot or kettle of water heated throughout the day so that when you add more water to the pot, it is already hot water. Adding tap water may slow the cooking process because the water has to heat to a boiling point. 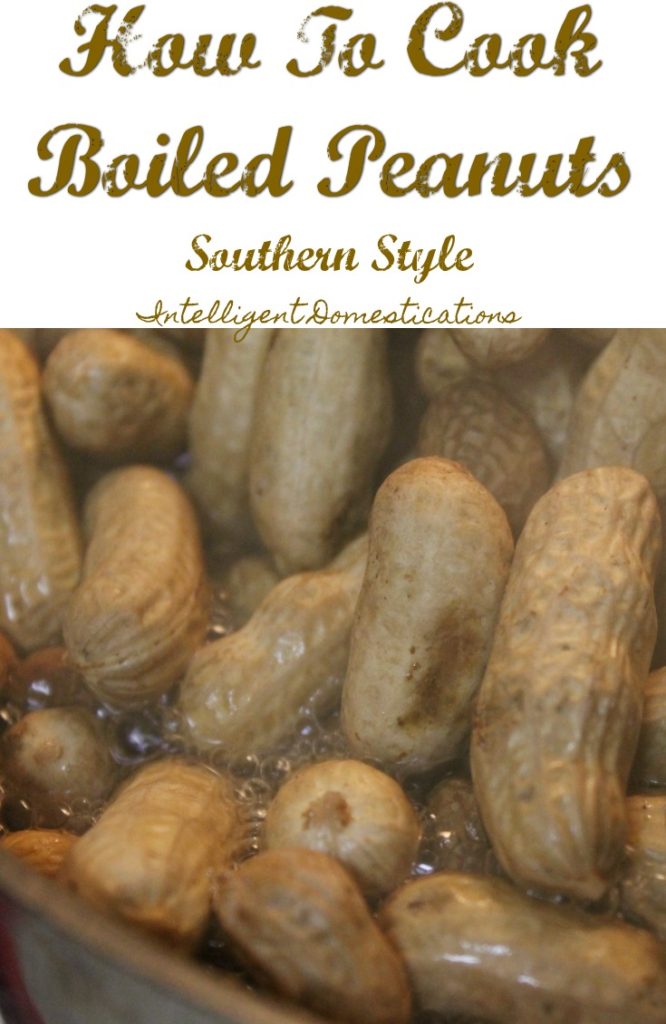 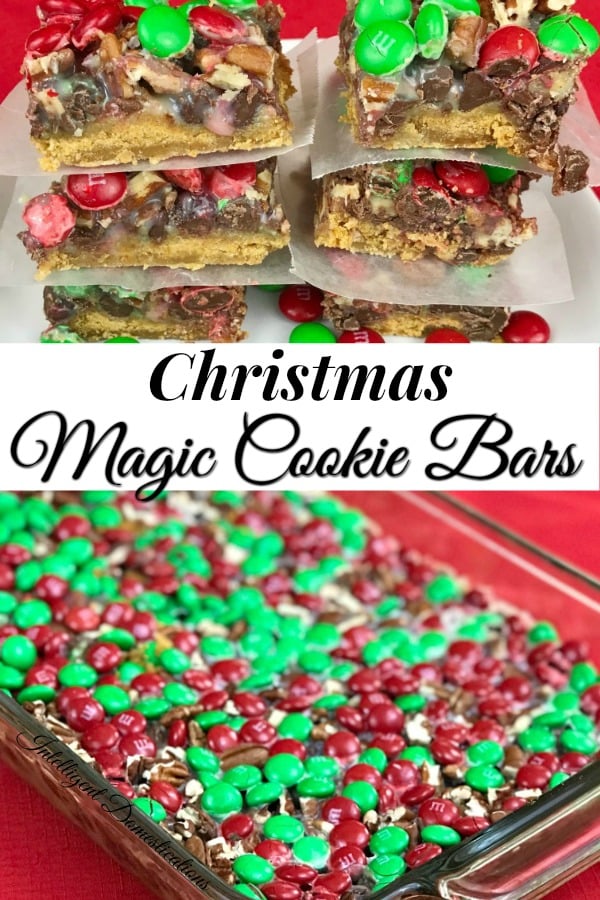 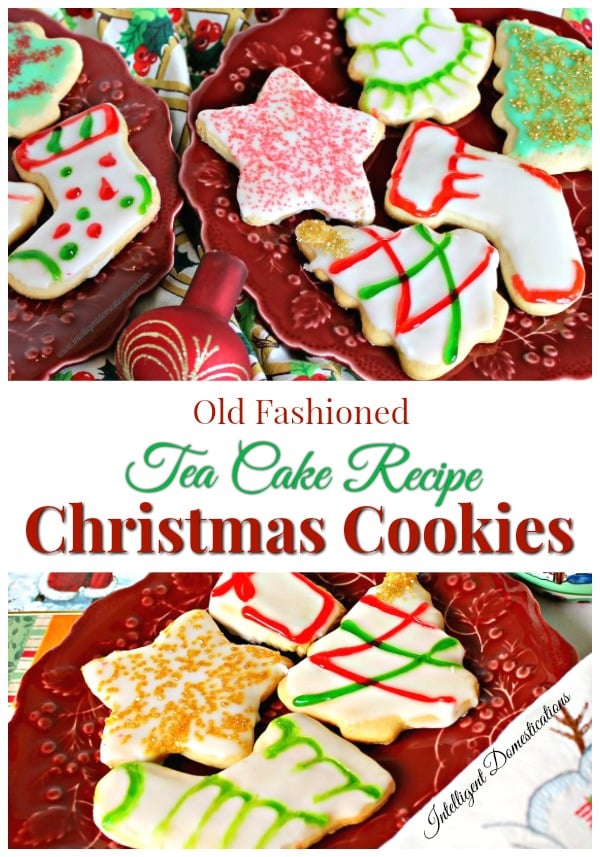 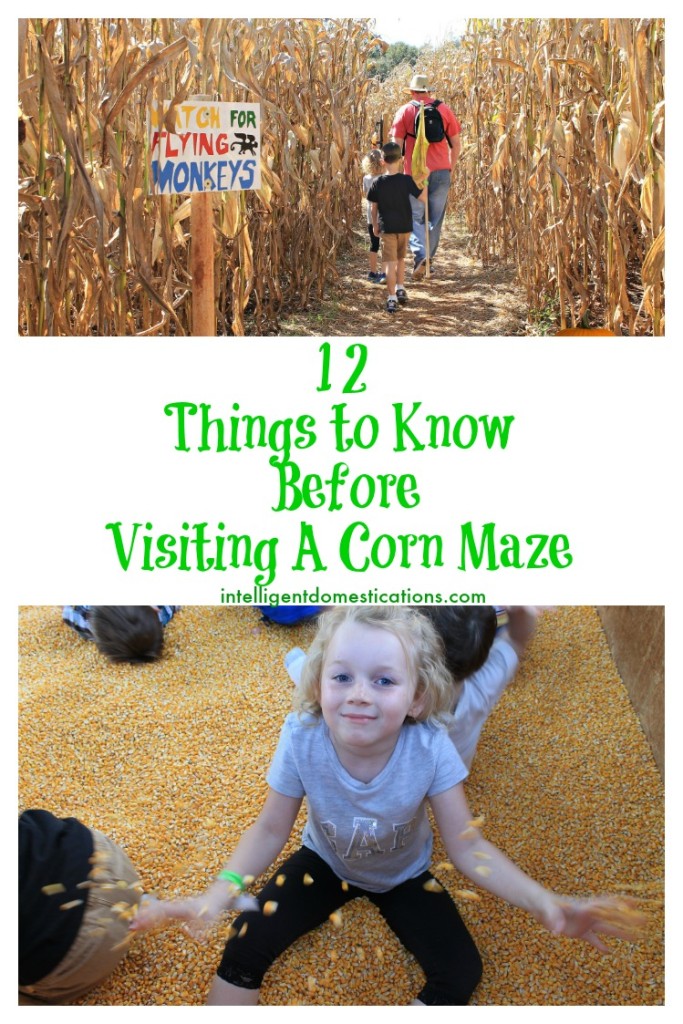