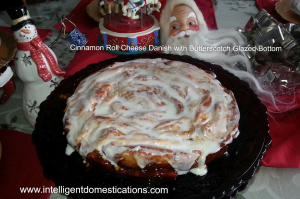 1 can Cinnamon Rolls (we use Pillsbury)

Set aside the icing package which came with the cinnamon rolls. Unroll cinnamon rolls and lay out on floured surface. Mix together remaining ingredients with mixer until smooth. Set aside.

That adorable Recipe Holder/I Pad Holder came from Avon. You can see it here(opens in separate page). I leave it out throughout the Christmas season and leave the recipes stacked there for easy access. It holds my Kindle Fire or I Pad well also when I’m using recipes from those. 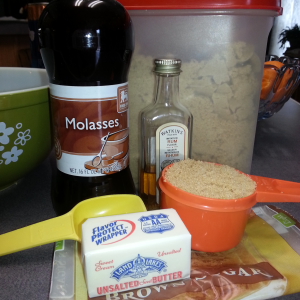 Lightly coat a 9 x 2-inch round cake pan with non-stick spray.  In a small saucepan over low heat, combine the sugar, butter, and corn syrup and heat until the butter is completely melted.  Remove from the heat and stir in the Rum Extract.  Pour the mixture into the prepared pan and tilt the pan to cover the bottom evenly; set aside. 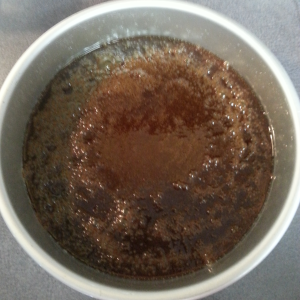 Now, place the unrolled cinnamon rolls carefully into the glaze, rolling them from the center to the outside leaving space in between for the cream cheese mixture. Pipe the cinnamon mixture in between the spaces. Less is more, too much can be a bit too gooey when done. 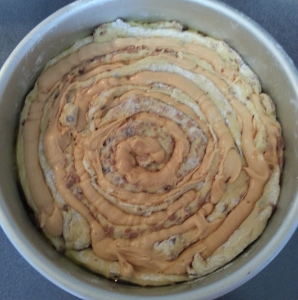 Roll the cinnamon rolls from the center out, leaving space for the cheese mixture.

Bake in preheated 350 degree oven for about 20 to 25 minutes depending on how fast your oven cooks, or until center is done and crust is golden brown.

Turn out onto a dish then set your serving plate on top and turn onto that so the butterscotch glaze in on the bottom.

Spread the icing on top and Serve!