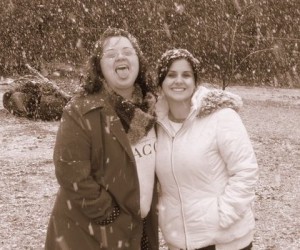 Tiffany and I enjoying the snow fall. Feb. 2010

Have you seen the You Tube video of the guy poking fun of southerners for clearing the grocery shelves of milk and bread when there is snow in the forecast? I’m a southerner and I found it hilarious! Folks around here tend to go a little crazy when snow is in the forecast.

I was born and raised in the south. Being a southerner is all I know. My only experience as a northerner is a brief stint living in Charlotte N.C. as a child.  It snows enough in Charlotte, they actually sell snow chains for tires up there! I’ve traveled as far north as Canada, during the winter no less! We traveled up to Flint, Michigan in 1979 to visit relatives. Their next door neighbors came over and positioned themselves in a corner of the dining room for an entire day of our visit. They were there just to listen to us talk! We were watching them too though. There were several inches of snow on the ground. We were bundled up like Ralphie’s little brother, Randy on A Christmas Story. Those folks were walking around outside in short sleeves and flip flops!

Snow in the south is a real novelty. It can shut down schools, businesses and certainly roads. Snow chains are not sold in stores down here. There are no snow plows being sold at the Home Depot. Snow is also great for business. Folks flock to the grocery stores and clear the shelves of milk, bread and water. I imagine the potato chip aisle takes a beating too. Some people pay top dollar for firewood just in case the power goes out, which it will if ice is in the forecast. There are lots of Pine trees down here. Their long thin limbs crack and drop under the pressure of ice more quickly than other types of trees.

Snow appeared in our forecast a few days ago, projected for the first of the week for parts just north of us. The very day that forecast came out, there was a run on milk, bread and water! The thing that makes it such a topic of humor is that the entire incident is usually over within 24 hours.  We don’t get snowed in for days weeks or months down here and we don’t want to. We don’t get much snow, just enough to make a grass embedded snowman.

We got 16 inches of snow in 1973 here in middle Georgia. People still talk about that. I was in high school, the snow pictures were featured in our yearbook the next year.

I have no idea what it is like in the ‘snow’ states but down here, it shuts down normal life. In our defense, let me just say this. We don’t turn on fire hydrants in the streets for children to play in the water in the heat of the summer. We are accustomed to the heat and have adapted appropriately. We sure hope to have a little fun in the snow though! 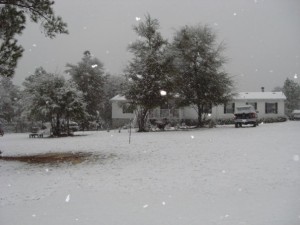