Happy New Year’s Eve to you! How do you really feel about going into a New Year? Does that make you excited, sad or ambivalent?

Most of my adult life, I’ve always been sad about the New Year. This year, I am almost excited about that change and what it could mean for me and my family. 2013 will remain etched in our hearts and minds from now on for both good and not so good reasons.

We will need to reach back to December 3 of 2012, shortly before 2013 began for me to really give credence to the effects of 2013. Dec. 3, 2012 was my first day on my new job for a local non profit agency as a case manager. It was a dream job for me, assisting the less fortunate with the services our agency provides. I loved every single thing about it, the tiny little details one must learn, the big picture, all my co-workers and the little family we were together but mostly, the clients themselves. I finished college a few weeks before I turned 50. I crammed my 4 year degree into 6 years! My last day of school was only a couple months after the economy crashed in 2008. I’m still praising God for allowing me the opportunity to achieve that dream. Fast forward five years and I finally got a job with that college degree! Oh yes, I was very excited to finally be employed but again, it truly was my dream job with a non profit agency. So, I went into 2013 with a new perspective on life from that point of view.

Back to 2012 again, for a better understanding of 2013. My baby girl got engaged! She and her fiancé had been dating for almost 7 years. The date was set for January 20, 2013 and the planning began! I will be sharing some of their wedding details soon with pictures as we approach their anniversary. Their wedding was at The Hay House in Macon, Ga., a very beautiful Victorian home with original furnishings.

Sometime in March of 2012 my mother was diagnosed with breast cancer for the third time. She had previously had radiation and a mastectomy. This time the cancer was in her lymph system when they found it. We all knew what that meant. She went to live with Jesus almost a year from the time we learned the news. She left on my Dad’s birthday.  Almost everyone was there around her bed, at home in her room when she went to live with Jesus on March 16, 2013. This is the biggest life change that I have had to accept and conform to this year.

My niece, Brenda had exciting news from 2012 to manifest in 2013 also. She and her husband were expecting her second child in March of 2013! Brenda’s son was 10 years old when his baby sister was born. Ellie is a joy to this Aunt! I love spending time with her. She is a happy baby. Brenda and her husband allowed me to be in the delivery room when Ellie was born. There is absolutely nothing in life better than witnessing a new life! Ellie was born on Easter Sunday, just 15 days after my Mom, Brenda’s Grannie who raised her, left to live with Jesus. Just a couple of days later, Brenda’s mother passed away suddenly from a massive stroke at the age of 55.  It was devastating.

June of 2013 brought another challenge. I was working out of town. I had depleted the program funding for my county and volunteered to assist in another county. It was about an hour drive from my home to the office I would work that day. While trying to empty my arms of supplies,  and bags of paperwork without spilling my coffee, my cell phone rang. Who would call me when they KNOW, I’m at work? I looked down at the number and my heart sank. It was a Florida number from my Uncle’s business, this can’t be a good thing. My Uncle B.T. had been found dead just a few minutes prior. His secretary called me. Uncle B.T. and my Dad were the two oldest of 11 children. They had always been close. Our families celebrated many holidays and special occasions creating a lifetime of memories. Uncle B.T. was the only one left. Aunt Doris died a few years prior with my mother by her side. They were lifelong best friends. My Dad and my Mom were gone. Uncle B.T. had been so sad. I called him often.  He called me just about three weeks prior to his death. He wanted me to know that he had taken care of all his funeral arrangements. My husband and I went to Tallahassee to spend time with him immediately. We enjoyed a long interesting conversations and shared some good meals. 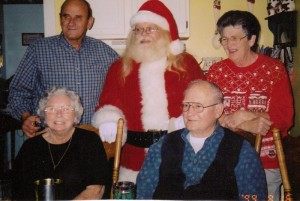 My mother had a best friend who I considered to be my ‘other mother’, Jean Johnson. I remember a conversation I had with Ms. J about death many years ago. She shared some great words of wisdom with me about death. She said, Death is a part of life we must come to accept. She was exactly right.

August 27, 2013 I lost my dream job with the non profit agency. I started this blog shortly afterwards. I’m still new to blogging but striving to learn and improve constantly.

Yes, 2013 has been difficult to say the least. My faith in God has not waivered. He is my comforter, and my redeemer. My husband is my very best friend. We are soul mates. He has been there for me, we have walked hand in hand through this difficult year. We have purposed in our hearts that next year, beginning tomorrow, we will move forward with a positive attitude and a cheerful heart. My husband has declared 2014 as the year of Organization and Better health! We started working towards that goal the day after Christmas with an organization project almost complete.

Ahhhhh, Thanks for listening. Saying those things is like a purge of the mind. Let’s move forward into 2014 with an attitude of Better health and Organization!!